Biodiversity in the Forests of Ixtlán
Man’s presence in the forest
The faces of maize
Struggling to survive
An age-old profession: tlachiqueros
Pulque, women and organization
Integrating Biodiversity into Well-being
Biological Corridors
Quetzal and Shade Coffee
Chicza, the Real Chicle
Home Forests Zaragoza: the pearl of Oaxaca
Forests 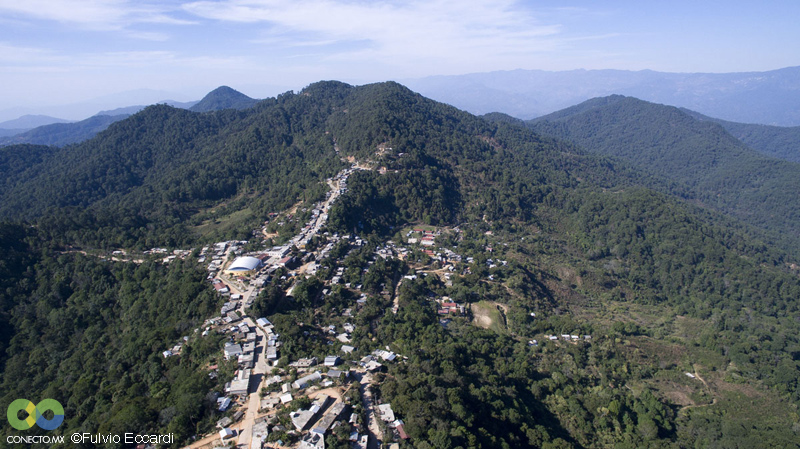 Amongst Coffee, Migration and Economic Diversification

If you look at a map, you will see that Zaragoza lies at the end of a winding, rocky road after a 10-hour journey. We traveled to this community located in the heart of the Sierra Madre del Sur because we were told we would find “an abundance of quality coffee” there.

But as the dust from the trip settles, we realize that the village has far more to offer than just coffee. Zaragoza perches on top of the Sierra Sur. The Mixtec people’s buildings and houses spread along the crest of the mountain and eventually spilled down the other side along cracked dirt roads. In the soft evening light, whole families assemble on the flat roofs of their houses to clean the coffee beans they laid out to dry amid the heady scent of the Florida toadwood or guanananche tree.

Although they have not spoken their indigenous language for decades, the villagers follow their grandparents’ advice and continue to obey indigenous customary law at the local level, even though federal laws prevail at the municipal level.

Young people, who watched their parents migrate and now dream of crossing the border into the United States, dress more like the inhabitants of the outskirts of New York than those of the sleepy, rural Mexico portrayed in El llano en llamas, a collection of short stories by Mexican author Juan Rulfo. The boys sport hoodies and the girls are clad in tight jeans and hip hoppers’ tennis shoes. During the day, they help with the farm work and in the evening, they head for the Internet cafés, the new meeting places where chat with their cousins or other relatives who emigrated to the United States on Facebook.

Everyone goes away, mainly to Atlantic City in New Jersey, but also to the states of New York and California, where they work in restaurants, bakeries, hotels or construction sites. Some people do their work very well, like Armando López Sandoval, a tall, thin young man with a mournful expression who lifts sacks of parchment coffee as though they were full of air. When he had only been back in Zaragoza for a few months, his employer in the United States kept trying to persuade him to return to his job at the restaurant. “Once I was employee of the month; and then I was employee of the year,” he reveals one afternoon, after pulping the coffee beans and spreading them out to dry. Armando stuck it out for six years, sometime holding down two jobs at a time, and sleeping just four hours a day. He saved up, came back and married his girlfriend from the College of Science and Technology Studies (CECYTA), Siria Romero López, who is a cheerful as Armando is gloomy. During her boyfriend’s absence, Siria took herself off to Morelia to study computer science. Shortly before their second wedding anniversary on February 14, they opened an Internet Café, named “Ciber Arlett” in honor of their newborn daughter, Arlett Sherlin, on one of the village hills.

References to the United States are visible everywhere: in houses, whose bare rods on the roof always hint at the possibility of a second or third floor and in the trucks that speed through the village laden with logs, with the phrase, “America: Love it or leave it,” written on the fender next to a bald eagle.

Names like Arlett Sherlin mean that migration makes itself heard as well as seen. The generation of Ponciano, Bulmaro, Gaudencio and Antolino, who fathered the generation of Blanca Estela, Jonathan, Jesús and Adolfo, are now grandparents to babies with names like Emily Juliette, Hannia Janney, Heidi, Kenya, Mitzy and Elioth Jeremy.

This latest generation, which now happily chases chickens in the backyard and eats corn tortillas, will undoubtedly grow up in brick and mortar houses with electricity and telephones. Conversely, in 1989, when Gaudencio or “Bencho” married Rebeca Riano González, there were three concrete houses and the vast majority of the community slept in wooden or adobe houses. Remittances have been the engine of all or much of what is described above.

If nothing changes in Zaragoza over the next 18 years, this latest generation will be able to choose from three types of land ownership: smallholdings, common land or ejidos, another form of common property.

They will become adults in a place that still elects its community police in an assembly and if necessary implements curfews from 9 pm onwards, as it did in 2013 to curb the wave of robberies with violence that ended with the lynching of two alleged assailants in the neighboring town of La Reforma, Putla de Guerrero. One was killed coming out of his house as he was trying to escape, while his accomplice was released from the city jail only to be murdered on the esplanade, according to the local media of the time.

The one thing that has withstood this cultural implosion is coffee, a product that fills the people of Zaragoza with pride, even though now as in the past, it has experienced moments when people appear to work for love rather than money since it costs more to produce than to sell.

Rebeca, whose parcel of land yielded coffee that earned her recognition in the Cup of Excellence Mexico 2013, admits that she gave up from 2004 to 2005, discouraged by the extremely low coffee berry prices. But her father-in-law, for whom the coffee trees he had planted 30 years earlier were a legacy and part of his heritage, took over: he picked the ripe cherries and cleared the land, harvesting 15 sacks of coffee beans. This taught Rebeca a lesson and a few months later, she went back to pruning and weeding. As a woman, I’m interested in the process of my plants,” she says, with a basket tied to her waist, and reflects, “Money from the remittances kept the coffee plantations going, because even though we could not afford to pay the farm hands, we worked the fields ourselves.”

Sociologist Armando Batra, who coined the term campesindios (Indian peasants) explains that the farmer’s relationship with the market is not designed to make a profit, as happens with capitalist entrepreneurs, since agricultural products are usually sold at below production costs, but one in which sales are used to buy what he needs to survive. Miguel Tejero, advisor to the State Coordinator of Oaxaca Coffee Producers (CEPCO) elaborates on this concept when he explains in an interview that coffee cultivation accounts for no more than 30 or 40 percent of the money coming into the coffee-growing families who diversify their income.

“There are several key components such as unskilled labor, resources from migration and subsidies from the Mexican state –through SEDESOL, SAGARPA and others. All this diversifies farmers’ sources of income. Coffee producers also have other activities such as their backyard, their patch of corn, a bit of trade. The sum of all this amounts to a peasant resistance strategy,” he explains.

Coffee cultivation in a system of indigenous peasant production is very different from that of large farms, which easily go bankrupt. When a large producer realizes he can no longer pay back his loan to the bank, he gives up and looks for more profitable sectors.

“In the case of Oaxaca, for example, most coffee plantation owners live in the capital and very few live off coffee production. Their children are no longer farmers; they have been to college and are professionals,” he adds.

This is obvious in Zaragoza, in the municipality of Santa Cruz Itundujia, where honey and wood also constitute sources of income and where most people in the town engage in a trade or profession during the time they do not spend on their coffee plantation.

So Rebeca and Bencho run their carnitas (fried pork cubes) business, “Tacomex” while Catalina sells groceries and Siria rents the use of the Internet. Antolín is an internal CEPCO inspector, Alberto a carpenter and Angelina a nurse.

But whether because of love or tradition, the Mixtec people still identify themselves first and foremost as coffee producers. “I already have a job but that does not lessen the desire to continue producing coffee, it’s in my blood. I was raised by my grandfather and it was something he left me,” explains Alberto. 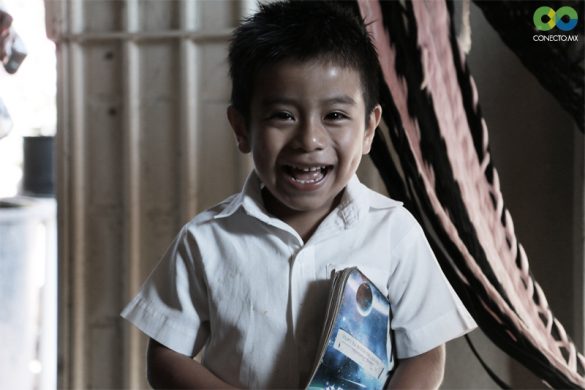 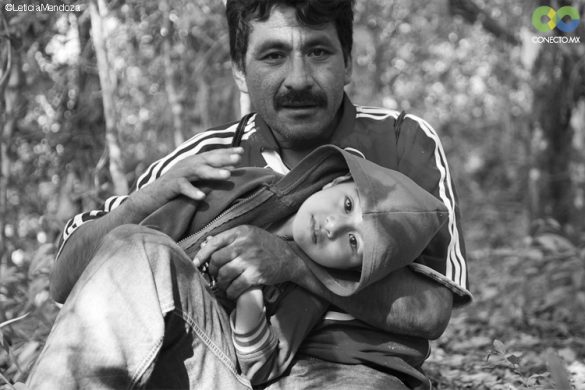 And they do it well. So well that their harvest has been sold as the “Pearl of Oaxaca,” a brand CEPCO developed to sell to Intelligentsia Coffee, a US company that roasts and sells specialty coffee.

“Grown at 1800 meters above sea level, this coffee is sweet, mild, flexible and extremely easy on the palate. It is not a complicated or intellectual coffee; it’s just delicious. It has chocolaty tones, with a hint of sweet caramelized lemon and dark cherries and a honeyed aftertaste”. That’s how Intelligentsia Coffee’s cuppers describe the coffee from Zaragoza.

“We have seen many operations around the world but none of them compare with the level of organization and communication of our peers in Oaxaca”, they added in their review.

That may explain why although the coffee leaf rust plague decimated the Mexican and Central American countryside, in the neighboring community of San Luis Yucutaco, the cooperative has used nurseries to grow a variety of plant that has tolerated rust one hundred per cent and obtained a good score in the cup. The 16 communities affiliated to the cooperative take great care of their nurseries so that they can regenerate their old coffee plantations with this “new” variety they have yet to name.

From their community built on one of the ridges of the Sierra Madre, the Mixtec people are not only showing the way to the depths of Mexico, but, as a friend said, to a Mexico of possibilities. In the words of Intelligentsia, this is precisely where “great coffee, spectacular landscapes and a group of dedicated people come together”.